Having been a music lover for most of my life, the most frequent and difficult question I’ve always had to deal with is the one and only: “What kind of music are you into?” now, I think you can all relate when I say this is the most difficult question one could ever ask, but I found out I manage to get away with it pretty easily simply by generalising my way too long list of bands with “I’m into indie rock”.

I wish I could say this helped a lot, but it generated the same result every single time, with people either misunderstanding or voluntarily trying to be funny (not) by saying “Oh, so you mean, like, Indian music?”
Well well. Turns out, Indian indie rock is a thing, and I had the pleasure to discover it in the first place with an amazing artist going by the name of Alluri.

Hailing from Hyderabad, India, his music is almost impossible to categorise into a specific genre thanks to his multiple influences, including classical music which was absorbed in his teens and acts of the likes of Morrissey, Doves and Joy Division, which he’s been listening to while learning to play guitar during his studies in the UK. If Arcade Fire and Ennio Morricone had a musical child, Alluri’s triumphant and euphoric tunes are probably what it would sound like.

Now working between India, the UK and Italy, the singer-songwriter has spent the last summer recording his latest album in his native language (Telugu) in Milan, teaming up with Muse producer/mixer Tommaso Colliva and Italian musician Massimo Martelotta, from cult cinematic Italo-funk band Calibro 35.
He then went on forming a brand new touring band with the artists who feature on the album, and after a number of performances in London and also at The Cambridge Folk Festival he eventually brought his vivacious live show to The Islington, London, last week, for an exclusive showcase of tunes from his upcoming release, which is due for next year.

Alluri played a quite short but intense show for a packed and enthusiastic crowd which kicked off with Naa Tow Raa (Come With Me), its musical crescendo and reverberating lyrics being the perfect intro for the whole set. Malinyudu (Gutter Man) and Baalyam (The Lost Irredeemable Magical Weirdness of Childhood) followed, the latter being one of the highlights of the evening: a cheerful, carefree song with a touch of melancholy, about childhood memories and how they shape us into the grown-ups we eventually become.
Next on was Puttamu (The World), an almost entirely instrumental track bearing an almost jazzy feel with its gentle sax in the background, followed by Beatles-esque Emi Chestunamu (What Are We Doing?) with its bright and ever-increasing brass section.

The closing tracks coincided with Alluri’s two latest lead singles, Evari Kosam (For Whose Sake) and Endukala (Lovers No More), which was described by the artist himself as a “happy break up song”, referring to its cheerful and catchy musical tone opposed to the sadness of the lyrics, describing the recurring drama following the end of a relationship.

In conclusion, although singing in a foreign language, Alluri positively engaged the crowd at The Islington with his genderless, joyous tunes, demonstrating an important point: great music is made everywhere in the world, and language is no barrier when you hear songs that offer a strong emotional and melodic connection. If you’ve ever fancied learning Telugu – an Indian language similar to Italian (allegedly) – then here’s your chance, as Hyderabad’s Alluri releases the kitsch cat-fight visuals for his second single, ‘Endukala’ (Lovers No More).

The ‘happy break up song’ combines simple lyrics and melodies with a euphoric brass section, giving the track a retro feel, and signalling a new, larger sound for the Indian born artist. Alluri absorbed classical music in his teens before learning guitar and bingeing on the likes of Doves and Morrissey during his UK studies.

Now working between India, the UK and Italy, he’s teamed up with Muse producer/mixer, Tommasso Colliva, and Italian musician, Massimo Martelotta, from cult ‘cinematic Italo-funk’ band Calibro 35, on this powerful and unique music sung in the local Telugu language of Hyderabad.

‘Endukala’ follows on from 2016’s ‘Evari Kosam’, and after spending the summer recording a new album entirely in Telugu, with Colliva and Martelotta, Alluri formed a new touring band with the artists who feature on the album, performing in London and at The Cambridge Folk Festival in August 2017.

Alluri returns to London on November 7th to play The Islington. 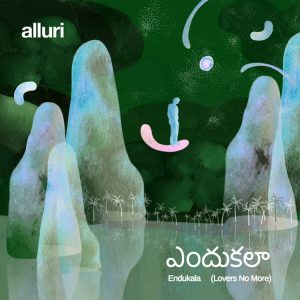 Alluri is no stranger to writing some of the weirder music out there at the moment.  the psychedelic maestro, in his new cut, ‘Texture Composure’, is up to his old tricks.

There is never a moment in this new single where the expected happens. Rather, it jumps from sense to silly, but never crosses the border into shocking. The songwriting, and indeed the structure of this single, leads you to wondering whether Alluri is an idiot or a genius. But that would seem to be the case with all great musicians at any one time.

‘Texture Composure’, asks all the questions, and indeed holds the humdrum sounds of modern music to account. You can’t help but love it as much as you can’t help wondering why is this so good.

Check it out here: Redd Alluri’s tale is a fascinating one. He never heard any western music when growing up in Hyderabad, the capital of Telangana state in Southern India, instead being force-fed endless Tollywood – a regional version of Bollywood. His moment of enlightenment came, finally, when his older brother returned home after finishing university, bringing the classic rock of Guns’N’Roses with him.

This was the path that led Alluri to, randomly, Ricky Gervais’ XFM podcasts. From there he was off: introduced to the wonders of The Smiths, Nick Cave, Joy Division and The Cure, and eventually making the leap to the UK, where he’s now based.

‘Man Of Truth’ was recorded in Brighton and sounds a lot like the brighter moments of late 1990s Britpop. Key track ‘All The Women’ has a brilliantly caustic lyric about, seemingly, the politics back home, and sounds both fiery and vital. ‘It’s With You’, meanwhile, is underpinned by a neat Kinks-influenced riff.

Stream the album on Spotify and Apple Music now.